skip to main | skip to sidebar
[drink-uh-bout] -noun
1. an informal bus ride taken by members of the communities of
Normal Heights, North Park, South Park and beyond, for the purpose of drinking without driving, sampling the wares at multiple local establishments, and being seen by the public. 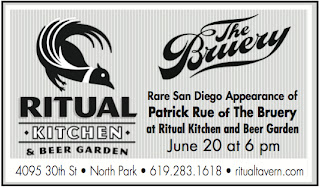 Over the course of time, we've only seen Patrick Rue in San Diego on a very limited basis.  We are pleased to host The Bruery founder on Thursday, June 20th in our Ritual Beer Garden.  The event will feature rare draft, including Sour in the Rye, a 40% rye malt with sour yeast aged a year in oak barrels.
Chef Kyle will offer a pairing for the Sour in the Rye,  Balsamic Glazed Boneless Leg of Lamb Stuffed with Cherries and Walnuts over Almond Cous Cous, topped with Cherry Gastrique.  Other Bruery Draft will be available as well, including Loakal Red which until very recently was only available in Orange County where The Bruery brewhouse is located.
The Bruery Website