Ritual Tavern will open at Noon to celebrate Anderson Valley Brewing Company. We are huge fans of the AVBC Boont Amber Ale, which has been available here on draft, in bottle and in can on our menus over time. This weekend we will tap new offerings from AVBC, four kegs to be exact.

AVBC deserves attention for several reasons, including the fact that
the combined competition roster of medals for these taps is no less
than 32, including World Beer Cup, Great American Beer Festival, as
well as Statewide competition awards. Anderson Valley also lends us
a sense of history, in that it is one of the first of our states
microbreweries, and has maintained close ties to the original San
Francisco and the new San Diego Toronado. Former AVBC brewer Sean
Jackson has taken on the task of traveling and educating beer lovers
about the rich AVBC tradition. Sean will join us on Saturday, he is
a really fun and entertaining beer lover.

Our four pairings will be available a-la Carte, and the atmosphere
will be casual. Come on by anytime after noon on Saturday to
partake. We have tapped the Brother David's Double early so that
folks can get a preview. "Brewed at the Anderson Valley Brewing
Company by David Keene, the owner of the legendary San Francisco
beer-bar, Toronado, this double-style ale features the huge fruit
flavors combined with yeastiness and spiciness that Belgian ales are
known for. ** Silver Medal: Belgian Style Strong Specialty Ale -
2010 Great America Beer Festival and 4 other medals **" (courtesy
avbc.com)
Posted by Ritual Tavern on Saturday, January 22, 2011 Links to this post

Jaynes Gastropub is Back!

Posted by Jaynes Gastropub on Thursday, January 13, 2011 Links to this post 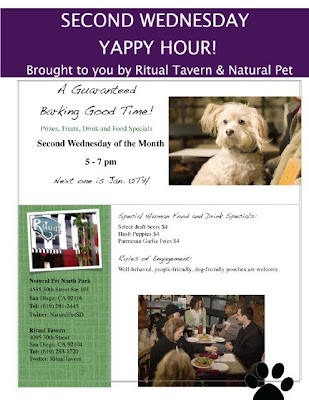 Happy Hour fun for the whole family!
30th Street's own Natural Pet and Ritual Tavern have joined forces to present 'Yappy Hour' on the 2nd Wednesday of the month. Hang out on our patios with your pooches! The Ritual will have food and drink specials for the humans, Natural Pet will provide samples and treats for the pups and Trio Gadjo will provide the musical accompaniment :-)
Posted by Ritual Tavern on Wednesday, January 12, 2011 Links to this post