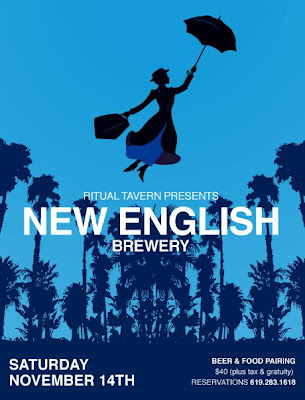 As you already know, San Diego's first ever Beer Week continues through this weekend. Here at the Ritual we are extremely excited to pair food with some of best beers in the world. Tonight we'll continue the trend by pouring Alpine Brew Co. 'Pure Hoppiness' on Cask and 'Duet' on tap. We'll also be serving BBQ Niman Ranch Pulled Pork Sliders (2) with sweet potato fries $8.50 in honor of the soon to be opened Alpine Brew Co. BBQ restaurant. Come in tonight and you'll have the pleasure of drinking with the brewer/owners of Alpine Brew, Pat and Val.

Tomorrow night, Saturday November 14th, the Ritual is serving our last dinner and pairing of Beer Week. New English Brewing is one of the newest additions to the San Diego brewing community. Simon Lacey the owner/brewer will be presenting 4 tasty beers paired with traditional English fare (6 pm: $40 + tax & tip) Please RSVP 619.283.1618 or info@ritualtavern.com

Cheers! from all of us at the Ritual :-
Posted by Ritual Tavern on Friday, November 13, 2009 Links to this post

Before (or after) dinner this Saturday night, check out the fun and festivity at some of South Park's favorite shops and stops:

* An Evening of Art & Shopping -- at Maeve Riley, Mythology (both on 30th St., just north of Juniper), and Junc Boutique (on Fern St., just south of Juniper).
Posted by Marsha Smelkinson on Wednesday, November 11, 2009 Links to this post

Starting at 5pm the first 72 people to order any North Coast beer get a free Keeper-Pint. 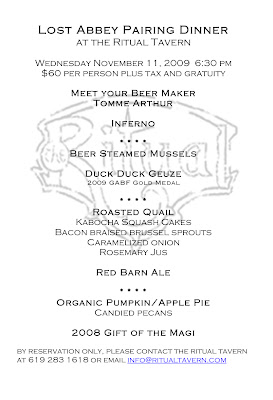 Saints and Sinners alike are welcome to partake in this Wednesday's San Diego Beer Week event at the Ritual: 4 courses of Lost Abbey beers paired with equally delicious food.
Posted by Ritual Tavern on Sunday, November 08, 2009 Links to this post 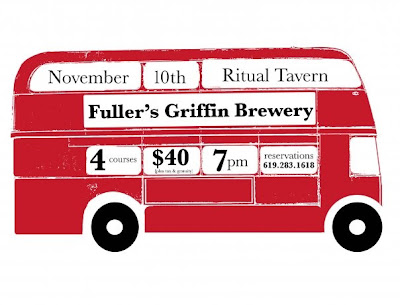 Ritual Tavern is excited about San Diego Beer Week, and our upcoming dinner and beer pairings! Tuesday November 10th we're pleased to offer a taste of London on 30th Street. Join Dennis Hartman of Fuller's for an enlightening presentation of the artfully brewed Fuller's beers paired with traditional English fare, including four beers and three food courses. Fuller's London Pride, ESB, 1845 and London Porter complimented by Roast Beet Salad, Roast Leg of Lamb, and Chocolate Pudding! $40 per person plus tax and gratuity. Call 619 283 1618 for reservations or email info@ritualtavern.com
Posted by Ritual Tavern on Sunday, November 08, 2009 Links to this post

Happy Beer Week from the Linkery and 30th Street

Probably the highlight of the week, from a 30th Street point of view, is the Green Flash Progressive Beer Dinner on Thursday...replete with a free hop-on/hop-off shuttle running up and down the three-oh.

As for us here at the Linkery...here's our lineup.

* We're starting a day early, Thursday, with Alesmith Winter Yule on cask paired with fried green tomatoes (local, of course) and with Stone Ruination on cask paired with grilled Baja octopus and ginger chile dressing. I know that a lot of you won't read this before Thursday is done, but fortunately we'll have Winter Yule on cask Friday, too. It's an Imperial Red Ale, 9% ABV, hand tended by AleSmith's cask maestro Bill Batten.

Then the real stuff starts. I'm pretty confident that this week we're setting a benchmark for craft beer celebrations at a farm-to-table restaurant:

* Friday the 6th is Airdale Airlines Nite. This is just meant to be a lot of fun and showcase Airdale, which is a newcomer to the local brewing scene but worthy of being a San Diego brewery. We'll have their Pale Ale, Spiced Porter, and Dark & Stormy Tap on draft -- at $1 each for everyone dressed in their pilot or flight crew carb. I figure the place should look like something from "Only Angles Have Wings" (Howard Hawks/Clark Gable joint, Google it.)

* Sunday the 8th, all day and nite, is our Green Flash Smoke Out. We're super-sizing (in a non fast-food sense) our regular Smokehouse Sunday to include 6 GF beers on cask, and 5 on draft. The cask beers all have specific pairings, too, and they're avaliable for $8 for the dish of food and a half pour of beer. A couple unusual beers on cask include Hop-less, Green Flash's new gruit beer made with herbs instead of hops, and SuperFreak, Green Flash's Belgian IPA with wild yeast for sourness and aged in wine barrels. Green Flash brewer and loyal North Parkian Chuck Silva will be on the premises, we'll have sausages made from Green Flash's spent barley, and Max is also considering spit roasting a pig. Just 'cause. Here's the full menu.

* Thursday the 12th is the Green Flash progressive dinner. For this we're teaming up with our great neighbor restaurants on 30th: Sea Rocket Bistro, Ritual Tavern, Jayne's Gastropub, and (on 30th in spirit only) Blind Lady Ale House. At each location you'll find multiple Green Flash beers available with paired dishes always under $10 for the pairing. If you're really a hedon you can probably get up to 12 or 15 in total. Green Flash is running a hop-on/hop-off shuttle on 30th to make it easy to get to all the venues. As an added bonus, totally unrelated to Green Flash, Fritz Maytag of Anchor Brewing, who is an inspiration to all of us who love craft food and beverages, will be at Toronado right up the street that night, too.

* Saturday we're capping off the week with a reprise of one of our most successful beer events ever: Mad River Serious Madness 2. Mad River is a phenomenal brewery from Blue Lake, California in Humboldt County. We've been friends with them a while, and once again they are bringing 6 cask beers and 5 draft beers to bust out on Saturday at noon. It's very rare for Mad River to offer specialty brews -- they're known for their consistent and excellent lineup -- so this is an amazing opportunity for which we are very grateful. We'll have their bourbon stout, double brown, chile beer, pumpkin ale, wheat wine and more. And, of course, we'll have pairings for each of the cask beers, at $8 for the food and the half pour of beer. Check out the full menu.

* Every nite of beer week we'll have multiple cask conditioned beers (actually we have that every nite of the year), great craft beers on draft, lots of delicious food, and, you know, good wine and house made nonalcoholic beverages too.

* Totally unrelated to Beer Week, we're co-sponsoring a free showing of Food, Inc. at the Velo Cult Bike Shop on Saturday nite. It's a look inside the industrial food system that we at the Linkery are working to move beyond. We like the fun of what we do but we also don't forget that we're trying to develop a way of eating and living that you and we will be happy to be in touch with. Food, Inc is another step toward a world like that. If you're interested, come to Velo Cult (2220 Fern, it's basically 30th but randomly has a different name that block) by 7pm on Saturday nite. Some of us will ride up to the Link for dinner afterward.
Posted by Anonymous on Thursday, November 05, 2009 Links to this post

Hop-less Gruit is a collaboration brew at Green Flash Brewing between
Brewmaster Chuck Silva and Head Brewer, Ben Spencer, from Magnolia Brewing
in San Francisco. Under Chuck's careful guidance, Scot Blair and Dennis
Borlek from Hamilton's Tavern performed several of the brewing functions
like mashing in and grain out as well as adding herbs to the boil. That's
right! Herbs!! No hops were used in brewing this Old World Gruit Ale.
Instead we used Marsh Rosemary, Sweet Gale, Yarrow Flowers, Rose Hips,
Heather Tips, and Elder Flowers. These herbs provide the bittering balance
as well as a complimentary herbal sweetness to the rich barley sugar
character. The malt make up is very similar to a big brown ale and the aroma
is both sweet and savory making it a great option for pairing with many
flavorful dishes (think venison). Hop-less finishes at 5.7% abv.
Posted by Chris on Thursday, November 05, 2009 Links to this post 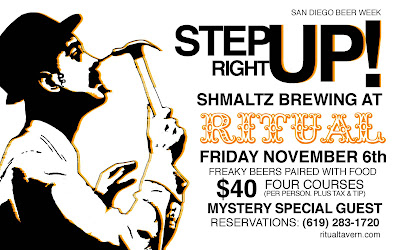 To kick off San Diego Beer Week, Shmaltz Brewing Company and Ritual Tavern will team up to present a beer and food pairing dinner that you won't soon forget. For only $40.00, you will be treated to four delicious courses paired with four of Shmaltz Brewing Company's award-winning beers, you'll also enjoy an unbelievable performance by the Saint Twins, the world's first and only twin thought readers. Featuring both HE'BREW beers as well as Coney Island Craft Lagers (TM), this unique menu is inspired both by Jewish food culture as well as the age-old carny lifestyle. Join us for a night of food, freaks, and fun!

*Menu subject to change based on availability and whim of the chef. L'Chaim!!
Posted by Ritual Tavern on Wednesday, November 04, 2009 Links to this post

Here we go, one of the best weeks (actually 9 days) on the calendar. November 6 - 15 the San Diego brewing community has put together a reason to get out and drink good beer. All over town restaurants, bars and taverns will be featuring amazing beer selections to celebrate craft brewing. Check out http://sdbw.org/ for all the details.

Alchemy will be featuring Wandering Aengus Cider, Stone Brewing Co. and Ommegang Brewery. Each night we will pair our tapa del dia with a beer from these three breweries...yum yum. Come on by, see ya soon.
Posted by alchemy on Monday, November 02, 2009 Links to this post

It's pretty amazing to take a risk to create something great, and to share that creation with a lot of people. The craft breweries around San Diego have done that with their beers, and filmmaker Anat Baron has done that by making a movie about the beer industry and how craft brewing is seriously shaking things up.

We're having a special showing of the movie, Beer Wars, followed by a Q&A with filmmaker Anat Baron and Chuck Silva of Green Flash Brewing. This is a unique opportunity to see the first screening of this film in the city of San Diego.

Anat's background, skill, and personality were able to get people to open up during interviews and tell it like it really is. From the annual beer industry convention in Las Vegas to the Great American Beer Festival in Denver, this gives you a larger perspective on what happens in San Diego every day. Plus, our own Greg Koch of Stone Brew has some hilarious clips in the film that you won't want to miss! And if that's not enough, we'll also be showing a short DVD that Greg shot at the original airing in Los Angeles when the live panel discussion was filmed.

How to see the movie

The screening is limited to 40 people and will take place on the first Sunday of San Diego Beer Week, November 8th at noon at Sea Rocket. The cost will be $10. Come as early as 11am or stay late to enjoy some beer and lunch including local grass-fed lamburgers, line caught American tuna melts, and mushroom sandwiches.

Email your name and phone number to dennis@searocketbistro.com to RSVP or give me a call at 858-663-7752.

See what else we have going on during Beer Week here.
Posted by Dennis Stein on Sunday, November 01, 2009 Links to this post